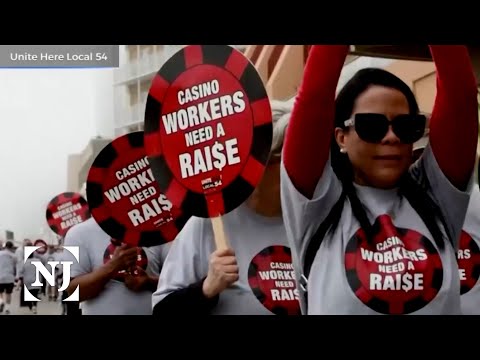 Casino workers union almost unanimously agreed on Wednesday for their leaders to call for a strike at several casinos across Atlantic City. The workers are ready for action if a new contract is not issued yet as of the start of July. The time period would be the busiest time of the year for casinos and is the best time for the strike.

“The industry better not take this lightly,” told Union president Bob McDevitt to a crowd of union members after the vote. “This is a no (B.S.) thing.”

96% of the “several thousands” of union members of Unite Here’s Local 54 are in favor to authorize their negotiation committee to call on a strike against five casinos in Atlantic City. But even so, an immediate strike is unlikely to happen as it needs agreements from the committee to holler the actual call to strike.

The plan was to strike on July 1 at Borgata as well as Caesars, Harrah’s, and Tropicana, the three casinos owned by Caesars Entertainment. If the contract is not written yet, the strike will continue to July 3, a day before Independence Day, against Hard Rock. Members say they will walk out right away whenever the strike is called.

“We are fighting for economics across the board, for all job classifications,” said Ruth Ann Joyce, a bartender for the Harrah’s and Hard Rock casinos. She previously worked at the Showboat until it closed along with three other casinos in 2014. She is also an experienced fighter in Atlantic City labor wars.

Joyce added that the condition of the casino workers is in a dire situation and it has to change immediately.

“Historically our fights, in general, have dealt with health care,” she explained. “This go-round, it’s about economics. We can’t find workers because there’s no money, and it’s hard to hold onto the workers we do have because they can go somewhere else and make more.”

Spokespeople for Caesars Entertainment and Hard Rock refused to comment on the workers' plan of action while executives of other casinos gave late comments.

McDevitt said Bally’s and the Ocean Casino Resort have agreed to the contract and thus a strike will not happen at both casinos.

“Bally’s and Ocean are in the green zone, Resorts and Golden Nugget are in the yellow zone and the rest are in the red zone,” he said.

The union has struck before with two of them standing out as the most impactful. The first was in 2004 when they strike for 34 days. And the second is when they walk out of the Trump Taj Mahal casino in July 2016, leading to the closing of the casino in October of the same year. After the event, the casino changed hands and is now operating under the ownership of Hard Rock.

Casinos and their partners are taking profit more than in 2019 before the COVID-19 pandemic arrives. Even so, the casinos say they only keep 30 percent of the profit from online and sports betting.

The rest were set to pay out third-party partners. The crucial metric of success is viewed from revenues made from in-person gambling. They say several casinos’ in-person revenue has surpassed their pre-pandemic levels while others have not.

The union asks for pay raise in the new contract since they experience financial struggle due to the pandemic and the increasingly rising prices.