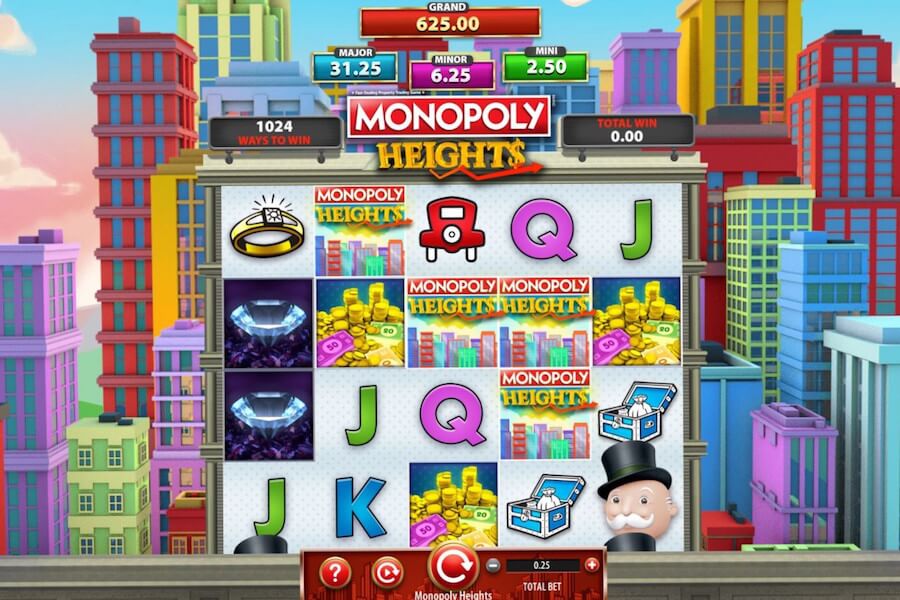 Introduction to the Monopoly Heights Slot

The series of slots started on this popular board game by Bally in partnership with SG Digital saw the release of this particular title in the year 2019. Monopoly heights slot includes 1024 betways to spin which makes win combinations possible in more ways than most other titles. RTP here is 95.85% and variance is medium to high. One can look forward to a feature-rich game like Monopoly 250k along with lucrative Jackpots as well.

As one joins the elderly gentleman on the reels of Monopoly Heights slot, the uplifting jazz music brings on a fresh wave of interest for the gamblers. The game screen comes with a slightly different cityscape in the background. The game windows expand and change according to the number of betways that spring into action during a spin. Along with the Re-Spins feature, the punter gets a Jackpot bonus round to play that can open up one of the four fixed Jackpots for the player. Maximum win that one gains here is an attractive payout of 2500 times the bet amount.

The familiar Monopoly character stands by the bright visuals of the game as one opens the slot. The background portrays the skyline of an urban landscape with colourful buildings and it looks as if the players are viewing the same from a distance. There are green hills set in the background as well. In the centre, lies the game matrix with the different symbols in bright and simplistic visuals.

Symbols of the Game

As the reels move one would find several icons familiar with the board game on display here and some others are specific to the game theme. Besides the standard playing card icons, one would find an open treasure chest, a car, tile with gold coins, diamond ring, and paper money. The Highest Paying symbols here are the blue large diamond, a gentleman with a top hat, and the slot logo. Wild here represents two dice with the word Wild. This appears on reels 2 to 5 and substitutes for other symbols except for the bonus icon. Scatters help trigger the Jackpot round and are represented by a red hotel sign.

Paytable of the high paying symbols:

Bally and SG Digital ensure that the gameplay is rich and varied in each of the Monopoly slot series. In this particular title you find the following:

Re-Spins with Expanding Reels: This feature comes first and retriggers often in the game. It is accompanied by Expanding Reels as well. This feature accompanies any win on the base game and is activated by the Monopoly gentleman. Wild can also come by and form a winning combination which in turn triggers this feature. Expanding Reels is showcased by the increase of rows that can go from 1024 to a maximum of 3125. The symbols from initial spin remain locked in position and the additional rows spin to land more of the gentleman symbols. Re-Spins continue as the gentleman symbol continues to land and form winning combinations. The feature ends only when the game window becomes full size or there are no new gentleman symbols on the lines. Then, all wins accumulate and get added to the player account as credits before next spin.

Jackpot Bonus Game: At least 3 of the red hotel Scatter icons trigger this bonus game. There are Scatter lands anywhere on reels 1 to 5 to trigger this game. Here, there are four Jackpots that one can win. These comprise Mini which is 10x the bet amount, Minor which is 25x the bet amount, Major Jackpot at 125x, and Grand which offers maximum payout at 2500x the line bet amount. The bonus game begins with a second screen where a board is displayed, comprising 32 tiles. One needs to uncover matching Jackpot icons to win respective Jackpot prizes. One needs to uncover 3 Minis or 4 Minors, 5 among matching Majors, or 8 among the Grand icons to get the cash prize associated with these Jackpots.

How to Play Monopoly Heights Slot?

In order to enjoy the above features and wins in this game, you can start playing with real money wagers with the following steps:

The 1024 Betways spinning technology with 96% RTP makes it possible for one to see more ways to win in every spin. The Re-Spins and Expanding Reels that retrigger often help increase wins as well. It is recommended that one makes as many pay lines as possible with their wagers to see higher chances of landing the maximum Jackpot amount of 2500x the line bet amount.

This particular Monopoly title in the Monopoly series of slots by Bally includes simpler features but impresses with the 1024 ways to win engine. The RTP is kept lucrative so that gamblers can enjoy fair wins on their money wagers. There are many Bally casinos that have this and other Monopoly titled slots for spinning for real money bets or for free.

Yes, it is possible to register at any of the Bally powered casinos and try it in free or demo mode.

2. What Kind of Bonus Features are Present?

3. Are Free Spins Available on this Slot?

Free spins are not part of the gameplay, but Re-Spins are present and they trigger often.

Get up to $90 Bonus during Mardi Gras at Virgin Casino