Get $20 FREE and Play Jack Hammer for Real Money!

Jack Hammer Slot is a video game that takes you through a fight between the Evil Dr. Wuten and superhero Jack Hammer. It comes alive out of the famous NetEnt Studio, and it features 15 reels and 25 paylines that roll independently. You can place a bet size of between 0.01 to 1.00.

It was released in 2011 and has continued to gain a reputation over the years. Jack Hammer video slot is based on the popular old school comic book titled, “Jack Hammer.” In the game, Jack is a private detective that is out to fight crime and maintain orderliness in society. On the contrary, Dr. Woten is a criminal who is always causing chaos and mayhem in the community. Learn more about the game in this Jack Hammer review.

Where to Play Jack Hammer

Jack Hammer is best played on SugarHouse Casino. This casino has a wide range of casino games and gives you a complete online casino experience. 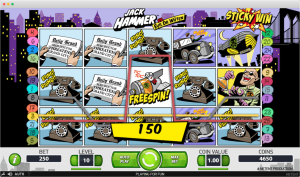 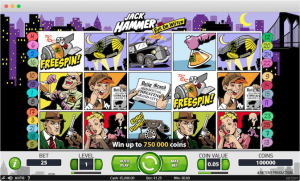 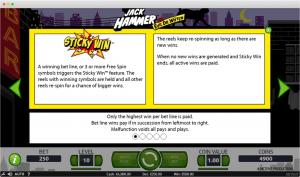 Jack Hammer video slot design resembles a classic comic shred and has a 1920 feel. Its features accentuate the classic theme, and they include a car chaser, phones, newspapers, poison flasks, airships, and gun-toting mobsters spinning on the reels.

The features are joined by four higher value symbols, which are the Evil Dr. Wuten, Jack Hammer, paperboy, and a lady on the phone. Common symbols include the evil Dr. Wuten, criminals with guns, eerily ringing phones, and beautiful ladies.  All these symbols and features are stitched together in an attractive cartoon style with an equally exciting storyline.

The Jack Hammer Wild symbol substitutes every other symbol except the scatter. The wild is represented by an explosion on the world “Wild.”

Jack Hammer has two potentially attractive features: Sticky Win and Free Spins. The Sticky Win feature is activated if you hit a winning combination. These features stick around as the reels spin again.

Again, if you get symbols that match a wild or the origin win, then they stick around, and the reels re-spin. That process continues until there is no space left for any other symbol to stick, and the payout is made.

Free Spin round activates if you land at least five free spin scatters. They are outlined as follows:

All payouts during the free spins are multiplied by 3x, no matter the number of spins you get.

Jack Hammer slot might not rank among the top progressive jackpot games online today, but it still awards you a maximum of 250,000 coins. However, it is not easy to hit the jackpot, and it regularly pays wins that are par your initial wager.

Jack Hammer is a low variance slot that provides an RTP of 97%. It is a game for casino players who like to take a minimal risk when playing online.