Invaders from the Planet Moolah Slot 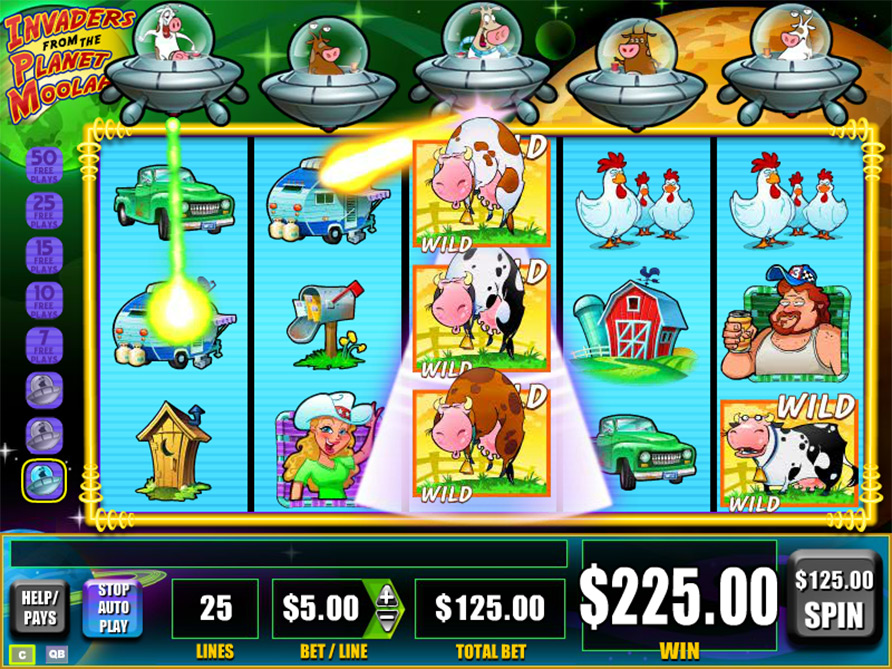 Get $20 FREE at 888casino and Play the Invaders from the Planet Moolah Slot for Real Money!

Moo goes the cow, and in comes the Invaders from the Planet Moolah slot game created by WMS. This slot game is out of this world, figuratively speaking. The story behind it is bizarre and interesting: intelligent cows from another planet are intent on invading earth using their tiny spaceships, and it is your job to keep the planet safe! It sounds crazy, but it is fun – and rewarding! Here is a comprehensive overview of everything there is to know about this outstanding slot game.

How to Play Invaders from the Planet Moolah Slot

Invaders from the Planet Moolah slot game may be exceptional, but it plays out like any other slot game. Here is a step-by-step guide on how to go about it:

Invaders from the Planet Moolah slot is exceptional, as already highlighted. Its alien-based theme is somewhat bizarre, considering that the invaders are space cows in space ships that look too small for war or comfort. No one knows why these extraterrestrial cows are here to invade earth, but it may have something to do with the green pasture – or the plight of their dumber cousins on earth. Whatever the reason may be, the action is one of the most thrilling you will find in an alien-themed slot game.

This slot game’s creativity is further complemented by flawless graphics. WMS makes use of the latest gaming technology to design every aspect of the game’s graphics in HD. To this end, the images on the screen are crystal-clear, and the gameplay is flawless.

The gaming experience is made complete by the game’s melodious tunes, which blends in well with the in-game action. The deep space background is also immersive and will get you playing out wild imaginary scenes of a war against intelligent cow invaders in outer space.

Another exceptional factor of the Invaders from the Planet Moolah slot game, besides its bizarre storyline, is its numerous symbols. Some of the symbols are as bizarre as the game itself, but you will recognize most.

This game has a total of 16 symbols. The main symbols are five characters from a typical farming family: a dog, cowgirl, grandma, grandpa, and a farm handyman. These five symbols are worth X20 your wager, but you need at least five on a pay line to trigger a payout. Additionally, and notably, this game does not feature the standard poker symbols. Instead, it substitutes them with seven household symbols: chickens, an outhouse, a trailer, a barn, a carton of milk, a mailbox, and a green truck.

The four remaining symbols are crucial to players’ chances of winning. These include three wild symbols presented as (normal) cows. The three cow wild symbols feature varying color combinations – black and white; brown and white; and black and brown –, but they have equal value.

Invaders from the Planet Moolah slot game was a treasure trove of unusual features that make it all the more fun, interesting, and lucrative. Features to look out for include:

This is arguably the most exciting feature of the Invaders from the Planet Moolah slot game. It is exciting not only for the exciting graphics it adds to the gameplay, but primarily because it gives a significant boost to players’ chances of winning.

The concept of cascading reels is quite simple. There are five cows flying space ships at the top of each reel. The space ships zap up symbols that show the greatest potential of forming winning combinations. The zapped symbols are then replaced by other symbols. This is convenient because the aforementioned winning symbols are kept on hold until more symbols show up to complete the combo, which increases players’ chances of winning.

Players also stand a chance to win as many as 50 free spins at a time, but this works a bit differently from the majority of other slot games. Players are required to land at least four cascading wins in a row, instead of the usual combo of wild and scatter symbols. The number of consecutive cascading wins determines the number of free spins won, ranging from at least seven spins and capped at 50 spins.

This game’s progressive jackpot makes it all the more lucrative. The jackpot is triggered when a player lands at least five spaceship symbols. The jackpot pays out up to 30 times the player’s initial amount.

This slot game does not offer in-game bonuses, unfortunately. However, it makes up for this using the range of luck-boosting features, including the cascading reels and free spins.

Can I play Invaders from the Planet Moolah slot game for free?

Yes, Invaders from the Planet Moolah slot game is available for free in its demo version. It should be noted that the demo version lacks some of the game’s features.

Is Invaders from the Planet Moolah slot game available on mobile?

Yes, this game is available on a wide range of mobile platforms, including Android, iOS, Windows, and Blackberry. However, players are advised to use the latest mobile web technology for a flawless gaming experience.

Take a space ride through the bizarre in the Invaders from the Planet Moolah slot game. It shouldn’t be too difficult to keep the invading cows at bay. It is also surprisingly easy to land a winning combination!