Get $20 FREE and Dead or Alive for Real Money!

Since its release, Dead or Alive slot has been the talk of the online gaming industry and is seen as a classic by most players. Its innovative and unique gameplay paved the way for high variance slots. It was released in 2009 by NetEnt, and it comes with a wild west-theme, which makes it one of the best games online today.

Where Can I Play Dead or Alive For Real Money?

The slot offers 5 reels and 9 paylines and comes from the reputable NetEnt software. The dead or alive slot is as basic as a slot can get, but incredibly volatile, which makes it very attractive to people who wants to take home big wins. To fully enjoy this game, we suggest that you try a couple of spins on the free demo, but then quickly move to the real money version of the game. That way you know your way around the slot but hopefully don’t miss out on any big wins. The best casino to enjoy this game at is PlaySugarHouse, who has made a great effort in building a top of the line online slots catalogue.

The slot’s reels are set against a western landscape with lightning flashing and storms rolling. Overall, it exudes a 20th-century theme, which a really rewarding feature to modern gamers. The game is accessible across all devices, and you can make a minimum bet of $0.09 and a maximum of $18. 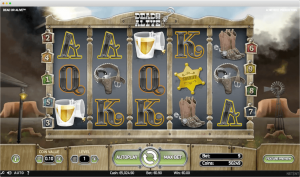 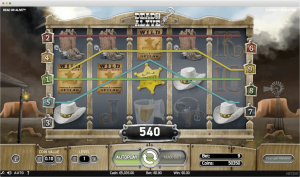 The symbols you can expect to come across while playing Dead or Alive are in line with its theme. A, K, Q, J, and 10 are the least paying symbols. High-value symbols include Della Rose, Jesse James, Apache the Kid, Bell Star, Billy the Kid and Jesse James on the reels.

The most rewarding symbol of Dead or Alive is the wild, which is represented by a “Wanted” poster. It can substitute for all other symbols on the reels, except the scatters, to help you form a winning combination. On the other hand, the scatter shows up as a pair of crossed pistols. It is important to note that the slot pays from left to right of the reel. 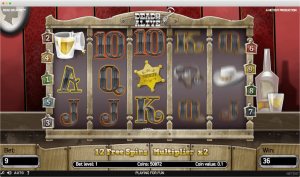 You can activate free spins when you begin to play the Dead or Alive online slot. Three scatter symbols anywhere on the reel rewards you with 12 free spins, and any winning you get is doubled.

Besides, if you trigger the free spins and a “Wanted” poster land on any reel, it instantly turns into a sticky wild. Such a symbol can also replace all other characters except the scatter. The difference is that a sticky remains in place until the final spins are played. 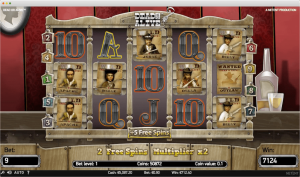 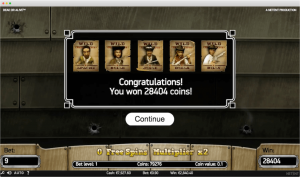 Dead or Alive slot can reward you with a maximum of 1,500 coins. The game doesn’t have a progressive jackpot feature.

One thing you should note is that Dead or Alive is a high variance slot that offers a 96.82% RTP.