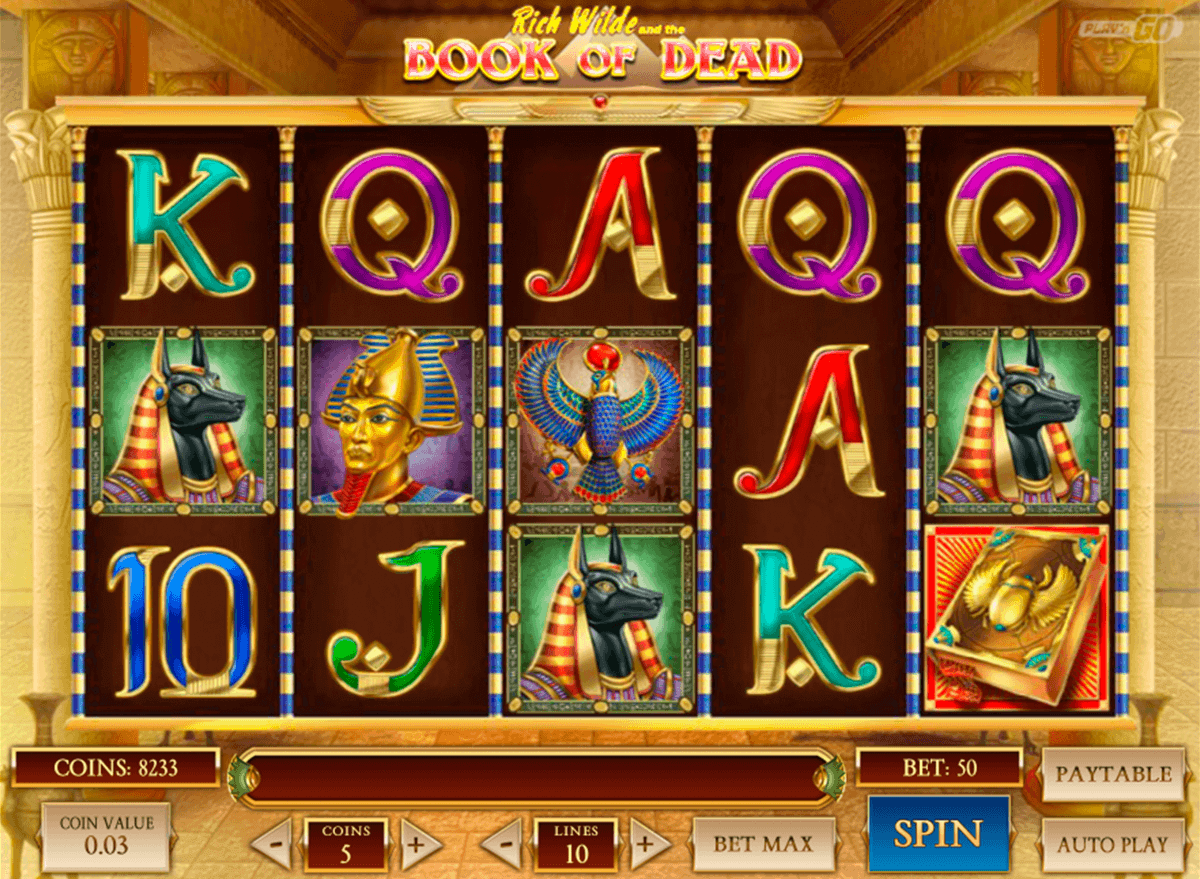 Get $20 FREE at 888casino and Play the Book of Dead Slot for Real Money!

We have seen bountiful Egypt-themed video slots in the past decade, but Book of Dead has been the most popular of them all. Play’n GO have obviously found a recipe for success back in 2014 when Book of Dead first saw the daylight.

The name pretty much reveals the game’s main features: An Ancient Egyptian book and a character that reminds heavily of Indiana Jones in an all-Egyptian theme. While similar features can be found in numerous other Egyptian-themed titles such as Book of Ra, Book of Dead stands out for a fantastic blend of a decent RTP, a strong array of bet sizes, and lucrative jackpots.

Play’n GO went with one of the simplest strategies with Book of Dead. This being said, the game has five reels, three rows, and ten paylines – a standard and very common layout. The number of paylines can be adjusted as players get to select anything from one to ten. Obviously, more paylines means higher winnings.

Compared to the vast majority of modern slots, the rules are pretty simple. You are dealing with card symbols from 10 to Ace, classic Egyptian mummies (Anubis, Phoenix’s, Pharaoh’s Mask), the Book of Dead, and Rich Wilde himself. The latter’s name may suggest it has the role of a wild, but that’s not the case. The Book of Dead is both a wild and a scatter, but we’ll talk more about it down below.

The 96.21% RTP ranks the Book of Dead slot high on the list of players’ favorite machines return-wise. Although it does not bring a progressive jackpot along, lucky winners can still change their lives with a whopping $250,000 jackpot (highest).

How to Play Book of Dead Slot

Book of Dead is a very simple game, meaning you do not have to spend hours deciphering the special symbols or the paylines. You’ll get into the scheme of paylines in no time. Basically, to play the game and become an Ancient-Egypt explorer, you just need to follow these two simple steps:

While playing slots, all players are dreaming of seeing special features on the screen. At the end of the day, free spins/bonus rounds/special symbols are massive differentials. Although you may score a jackpot during regular play, there is a much higher chance you’ll hit the dream payout on a bonus round of free spins.

Book of Dead does lack a multiplier feature (one of the slot’s rare downfalls), but it includes some other exciting replacements.

The Golden Book of Dead is the key element of the game. It can come in the shape of both a wild and a scatter. In the first option, it will replace any other symbol in the game. Overall, the maximum payline occurs when you see five Rich Wilde symbols on the screen.

In this instance, if you have four Rich Wilde symbols and Book of Dead as an extra element, you’d get the max 5,000-coin payline. The same goes for all other elements. For example, 4 Pharaohs and 1 Book of Dead will net you a 2,000-coin payline (the second highest in the game).

As mentioned above, the Book of Dead slot can come in as a scatter, too. Regardless of its position on the screen, it grants you winnings as long as you catch at least three symbols on the table. The generosity of winnings then depends on the number of Book of Dead scatter symbols in the following way:

Three scatters will not only secure coins. They will also release 10 free spins. It is also the maximum amount of free games you can trigger at once at the Book of Dead. Knowing the game does not have a multiplier feature, it is not an ideal number since numerous other slots are offering at least 15 free games plus multipliers on top.

We’ve now come to good and bad news. The first one is that an expanding symbol that can appear during free spins can significantly bump up your winnings. An expanding Rich Wilde can make a massive difference in the bonus rounds.

Knowing there is a chance you may see it is enough for the enormous thrill. On the other side, we should mention that you will usually have to be super-patient before landing an expanding symbol.

Last but not least, the slot has a gamble feature. It has always been a common element within slot machines. Most of you are likely familiar with how it works, but we’ll quickly go through it if there is anyone who is by any chance not.

You will trigger the gamble feature with any kind of win. The slot gives you the chance to increase your winnings or lose them all. In this instance, you will see a face-down card and you have the chance to choose either it’s color (red or black) or suit (diamonds, hearts, clubs, or spades). In the first case, you can double up your winnings, while if you go for suit you can quadruple them instead.

What is the highest possible win on the Book of Dead slot?

The maximum win is capped at 250,000 coins. This is if you bet the maximum $50 and land 5 Rich Wilde symbols on one payline. The highest possible payout is 5000x your bet amount.

How many symbols are there in the Book of Dead?

Book of Dead features 10 elements, including card symbols from 10s to Aces, picture symbols (Phoenix’s, Anubis, Pharaoh, Rich Wilde), and the Golden Book (Book of Dead) – the most valuable of them all.

Can I play Book of Dead without depositing?

Yes, you can play the Book of Dead slot for free at any online casino platform. The game can also be played on the go on all Android and iOS devices.

Although the absence of multiplier features and the shortage of free spins in bonus rounds affect the overall attractiveness of the game, it is easy to see why people generally love the Book of Dead slot.

It is always good to know where your wins come from which is why this slot ranks high among vast audiences. Simplicity is the key. When you mix it up with fairly impressive payouts, you get a super-popular machine.