When playing roulette, you can stumble upon the option to play either a European or American roulette wheel. The difference between the two is very small, but changes your chances to win by quite a lot. Let’s go through how a roulette wheel is structured, and what makes the European roulette wheel a better option for you as a player.

Composition of a Roulette Wheel

There are three basic divisions in a roulette wheel. They include the following:

Examined closely, you will realize that current or modern roulette tables consist of two balls that are assigned to them. There is a large ball and a smaller one, and when the ball spins on the lower track, “pins” or “bumpers” make an easy descent somewhat challenging. Such bumpers attempt to inhibit the control of the location or position where the ball could land. Many casinos prefer their roulette games to be a bit random in nature.

We now know that during the late 1700s to around 1800s thereabout, roulette had managed to become a popular game across the French elite. The European roulette consisted of two pockets; a single zero pocket with a red color and double zero with black color. The two numbers were considered as “house pockets.” In the event that the ball landed in such pockets, then it meant that the casino would win. Later it turned out to be confusing to a lot of players since all other pockets, though numbered differently, were also red and black in color.

Therefore, the inventors saw the need to have “0” and “00” pockets in different colors. The color then became green, a color that these pockets use up to today. As a means of making money, the wheel’s owner saw the need for shortchanging the winnings, as explained later on. 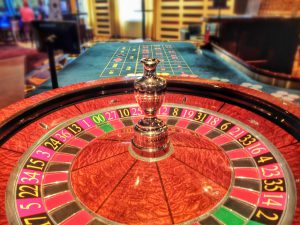 With the 19th century coming to an end, roulette was now one of the most popular and fashionable games in almost all European countries and had begun making inroads to the United States. In 1843, two French brothers Francois and Louis Blanc who owned a casino in Bad Homburg, Germany, introduced the single zero wheel with the intent of competing against other casinos which offered single and double zero wheels.

Later in 1860s, Germany abolished gambling and the Blanc family resorted to moving their operation to Monte Carlo, France – the last legal gambling site in Europe. The single wheel roulette quickly gained traction among elite and made Monte Carlo famous to the point of being alluded the gambling Mecca. The game was spread to different parts of the world except the U.S. where the Single wheel roulette was dominant.

The early version of the American roulette had a somewhat different layout from the present day wheel. It had numbers 1-28, single zero, double zero, and an American eagle. The 0, 00 and eagle were not considered bars; however, if the ball fell on either of them, the dealer would only pay bets placed on them. This version of American roulette had many drawbacks which eventually led to the adoption of the European wheel roulette.

The French double wheel roulette first made its presence in Mississippi, then moved to New Orleans and later spread westward. To solve the rampant cheating which was occasioned by devices hidden in the table or the wheel by both operators and players, the European roulette wheel was placed on top of the table. This new way of playing marked the start of the American-style roulette.

Without a doubt, single–zero European wheels are the best and ideal for a player. If you can easily bump on a European wheel, then that should be your best bet at roulette. There are several reasons as to why the European wheel beat double–zero wheels.

For instance, the house edge for the European wheel is 2.70%. Better yet, if that wheel allows en prison or surrender, then you would be crazy not to make even-money bets of odd/even, red/black, or high/low. Here, the house edge is as little as 1.35%, meaning that you have a real chance of winning on any given session.

It’s easier for a player to have an excellent streak while on a low house-edge game as opposed to the one that keeps on hammering away with a massive percentage. You should remember this when thinking about how far you can go risking your hard-earned money.

Now, if for one reason or the other you find yourself with the only option of playing the American double–zero wheels consisting of a 5.26% edge, as much as possible, look for a casino that has the option of surrender. When it comes to casino gambling, a 2.63% house edge is a sweet deal.

How many numbers does an American roulette wheel have?

How many numbers does a European roulette wheel have?

A European roulette wheel has 37 numbers. 1-36, and the 0. This means that they have one less zero than the American roulette table, which affects the odds and house edge for casino players.

How many numbers are there on a roulette wheel?

Depending on if the wheel is American or European, there are 38 or 37 numbers on a roulette wheel.

What is the highest number on a roulette wheel?

The highest number on a roulette wheel is always 36.