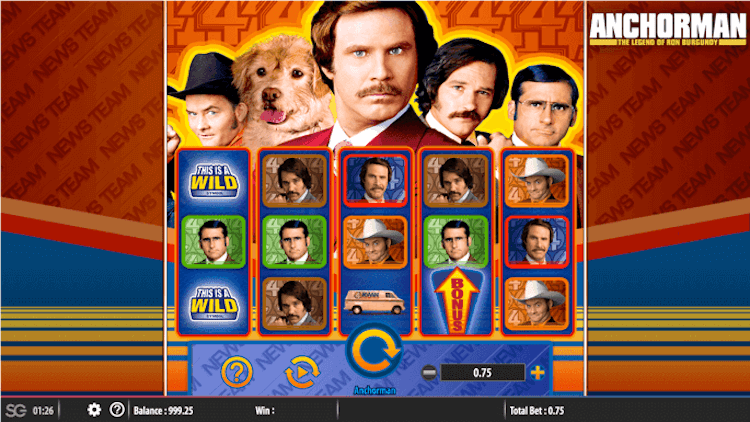 Get $20 FREE at 888casino and Play Anchorman for Real Money!

Anchorman – The Legend Of Ron Burgundy was one of Will Ferrel’s finest movies, and one of the highest grossing movies of 2004. 14 years down the line, we now have a brilliant online video slot (Anchorman Slot Machine) based on the movie, thanks to Bally Technologies, one of the four brands of gaming giants Scientific Games Corporation. Fans of the movie will definitely love this throwback, while newbies will also appreciate this brilliantly designed slot.

This colorful slot is heavily influenced by the blockbuster movie of the same name, with all its iconic main characters appearing on the reels. The real images of Ron, Brian, Champ, Brick and even Ron’s dog Baxter appear on the reels in comical poses, among other miscellaneous items such as cowboy hats and sunglasses.

The background template as well as the color combination makes this video slot look like a still from a 70’s news broadcast, bound to invoke nostalgia like the movie did as well. The hit jazz  soundtrack “Afternoon Delight” is a constant source of delight in the background, while hilarious video clips from the movie keep the players engrossed.

How To Play Anchorman The Legend Of Ron Burgundy Slot

Basic Controls of how to play the Anchorman slot

The blaring yellow arrow with Bonus written on it is the real game-changer in this slot. Landing 3 or more of those earns the player a spin of the Big Bonus Reel. The Big Bonus Reel can either lead to instant cash prizes as well as the “Nice, Very Nice or Really Good Jackpot” payouts, or further access to the 4 character based bonus rounds.

Anchorman The Legend Of Ron Burgundy is a hilarious take on the male-dominated news broadcasting culture of the 70’s. Ron Burgundy is the undisputed star of a channel based in San Diego, and works with his childhood friends Brian, Champ and Brick, each handling a different news segment. The movie revolves around the fierce yet hilarious rivalry between Ron Burgundy and Veronica Corningstone, a new female anchor on Channel 4. It eventually ends with Ron saving Veronica from a bear enclosure, and they are then shown as leading anchors of a top news channel.