Strike to cause financial hit on Atlantic City casinos, close to $3 million per day 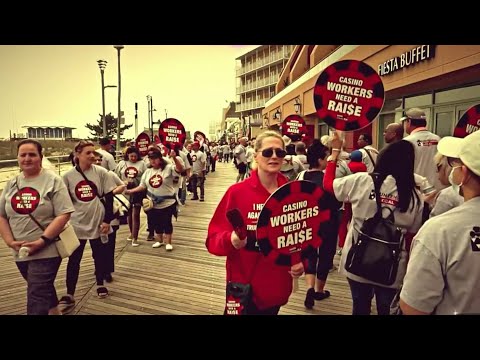 The casino workers union of Atlantic City are preparing to strike earlier next month to demand decent treatment for all workers. The workers demand contract renewal with the casino which expired at the beginning of June. The union said casinos in the city will lose up to $2.6 million every day the strike occurs.

Around 10,000 casino workers across Atlantic City are dissatisfied with casino workers’ treatment. Major union in the city Local 54 of the Unite Here demanded contract renewal with the casinos after the last ones expired just a few weeks ago on June 1. The workers demand wage increases to deal with the rapidly rising cost of living. They hope the casinos will honor the contracts when the new one is issued.

The total loss per day is calculated for the three biggest casinos in the city, the Borgata, Caesars Entertainment's Tropicana and Harrah’s. The Borgata will lose $1.6 million and Caesars’ is up to lose a total of $1 million collectively from both casinos. Caesars will be the most impacted by the strike.

Meanwhile, Five casinos of Hard Rock hotel-casino and Caesars’ own hotel-casino are at high risk along with Borgata, Tropicana, and Harrah’s. Golden Nugget and Resorts Atlantic City are currently labeled as at risk of dispute.

The union has announced a scheduled strike to start at the beginning of July. The union will start the strike on July 1 on four casinos of Borgata and all Caesars casinos. Hard Rock is the only casino to be struck on July 3.

The union issued a report last week’s Friday detailing the projection of revenue for this year’s third quarter. It said the casinos might see a decrease of up to 25 percent in Q3 this year compared to 2021.

The workers aim to launch the strike on the Fourth of July weekend. It is one of the most important dates for casinos since more people will come during the holiday. This gives the union an edge, coming with a stronger position at the negotiation table.

How casinos operate during the strike

“The casino floors at all properties would remain functioning as normal because they are not part of Local 54,” said Jane Bokunewicz, Stockton University’s director of the Lloyd Levenson Institute.

Bokunewicz said the financial hit caused by the strike is harder to predict. Many variables must be put into consideration including the number of protested casinos and public approval of the strike.

She also said the casinos will have to make do with available non-union workers as well as the upper staff to tend to visit customers. The strike will determine the outcome of the revenue dynamics.

Other casino establishments “would use non-union employees and management to keep the hotel and food and beverage sites operating at an acceptable level to attract customers. Revenue losses or gains would depend on how successful they are at doing this.”