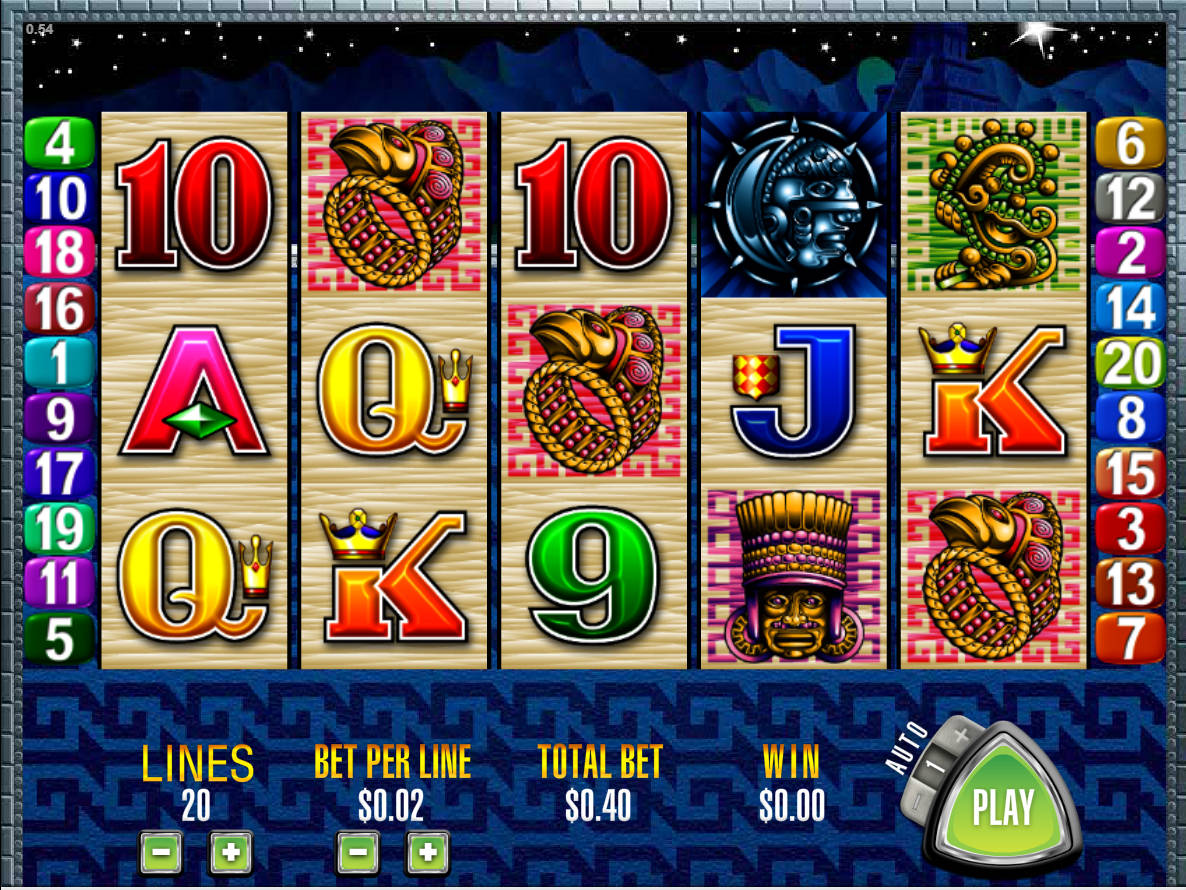 Get $20 FREE at 888casino and Play the Sun and Moon Slot for Real Money!

Sun and moon played a pivotal role in ancient civilizations whose ancestors treated these celestial bodies as gods. Influenced by one of the most famous ancient groups of people, the Mayans, Aristocrat designed an online video slot in 2011 called the Sun and Moon Slot. The game itself represents a standard Aristocrat creation, characterized by fairly mediocre animations and visuals. The screen is set against a blue background featuring a pyramid in the distance.

Sun and Moon is a typical old-school slot with simple gameplay and easy-to-understand rules. It comes in a five-reel, three-row, and 20-payline design. If you land at least two symbols of a kind in consecution on an active pay line, you will trigger a reward. Note the lines pay left to right. The more identical symbols you hit (up to five), the higher the payout will be.

You have the option to choose the number of pay lines you want to activate. Accordingly, you can also adjust the bet size by selecting the amount of money you want to wager per line. The array goes from two cents to $2.50 per line, meaning you can effectively bet from $0.40 to $50 per one spin.

The slot has an automatic play feature allowing you to activate up to 25 automatic spins. It comes in quite handy if you want to sit back and watch the screen rather than spinning the reels manually.

Just as they do in most other slots, the regular card-deck symbols provide the least impressive rewards at Sun and Moon. Bigger incentives come in with the appearance of the green, pink, and blue gold-accented symbols (a couple of amulets, rings, masks). The highest payout is reserved for the golden face mask wearing a big headdress.

Moving forward, there is a special symbol appearing in the shape of the Mayan temple. It can only show up on the second reel and serves to reveal one of the regular symbols.

The fun begins with the appearance of the two main symbols in the game, the sun and the moon themselves. They can both act like wilds and scatters. As wilds, they substitute all other symbols in the game to create the winning combination on active paylines.

Sun and moon are essential not only as wilds and scatters. They can also serve as your keys to the bonus round. As you all know, the real winnings at any slot happen only when you unlock the free games. You can activate them by landing at least two sun or moon wilds starting from the leftmost position.

Depending on the amount of triggering wilds, you can claim 5, 10, 20, or 50 free spins. If you hit two sun or moon symbols, you will unlock five free games, three such symbols will reveal 10 free spins, etc.

Nevertheless, it is important to know that the sun and the moon elements can’t substitute each other (although they can change every other symbol in the game). What we love most about the Sun and Moon slot is the fact the free games can be retriggered and that all of your winnings are doubled once you get into the bonus feature.

The vast majority of Aristocrat’s machines include the gamble feature. Sun and Moon slot is not an exception. You will find the gamble button just beside the spin button in the bottom-right corner of the screen. Every time you win, you will have an option to either collect the winnings or gamble to double or quadruple them.

To double your winnings, you need to correctly predict the color of the card. You can alternatively try and guess the card suit to multiply the winnings four times. You can the option to take the gambling risk up to five times before heading over to the next spin.

What is Sun and Moon?

Sun and Moon is an online video slot featuring a traditional layout with five reels, three rows, and 20 paylines.

Who designed the Sun and Moon slot?

Sun and Moon slot was created by Aristocrat in 2011.

Does Sun and Moon slot have bonus features?

Although it may not be the richest slot out there in terms of the number of bonus features it offers, Sun and Moon slot does have a free games round where most of your winnings will come from.

How can I unlock the free spins at the Sun and Moon slot?

What is the Sun and Moon slot’s RTP?