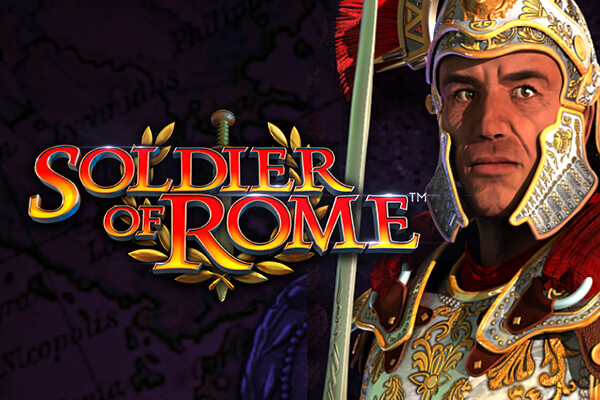 Get $20 FREE at 888casino and Play the Soldier of Rome Slot for Real Money!

Join the fearless Roman legions for a thrilling and intense gaming session like none other. The Soldier of Rome slot is another brilliant development from Barcrest featuring mighty reels and ten rows. The reel format in this game is so unique that it can earn bettors rewards of up to 500x their initial bet.

Mighty Reels, free spins, lighting spins and the Money Burst features all add an interesting twist to the game, heightening the battle field in one way or the other. Soldiers of Rome Slot comes with a Big Bet play mode that not only gives a higher RTP, but also increases the potential for bigger and more frequent wins.

How to Play Soldier of Rome Slot

If you consider yourself a victor, then you will definitely love Soldier of Rome Slot. Playing this game is not only thrilling, but also really easy to get started. Just follow the few steps below:

Barcrest had to bring all hands on deck for this one. Developing a slot that is worthy of the highly reputed and feisty Roman heroes was not an easy task. However, their hard work resulted into a brilliant game with fantastic features including Money Burst reels. The game has two versions; a base game (usually played on 50 pay lines) and the Big Bet game (which expands all ten rows and increases the pay lines to 100).

The game window is engulfed in flames that rise towards the front of the ancient columns. There is a fierce soldier, clad in full armor, standing majestically on the left. He fields his sword, triggering the lightning spins that add more super-stacked symbols to the individual reels.

Soldier of Rome Slot has a total of 10 pay symbols. The low-paying characters are typical cards including spades, clubs, diamonds and hearts. The medium-paying icons include a helmet, a set of words, the Roman SPQR emblem, a chariot and a coin. The symbols at the top of the pay table are a Roman nobleman and a Roman noblewoman.

The scatter symbols appear in the form of a tile that has a fierce Roman soldier and the slot’s logo. They come in an array of color variations both at the front and back reels. They also show up in the base game’s free spins. In the standard play mode, five of a kind symbols pay 1x all the way to 5x your initial bet. In the Big Bet mode, these scatters acquire a lower value, paying only 0.4x to 2x your bet. In order to score a win, there should be a minimum of 3 symbols from the left on a given pay line.

The centurion here is the wild symbol, appearing in 2-row stacks. In the base game, this wild symbol expands, opening up all ten reels, once it appears in full-view on any given reel. In the Big Bet Game and during the free spins, appearing in partial-view is enough to trigger the expansion.

This feature is triggered once you hit a wild symbol combined with other symbols, or if you land four matching symbols at the front of 2 Money Burst reels. The game window then expands to bring in all the ten rows before the lighting can strike the three reels at the back to add more super stacks of the same symbol. At this moment, the game can win you the maximum prize in each spin.

Three-six scatters symbols award up to 25 free-spins, all of which can be triggered indefinitely. In the bonus round, a partial wild-soldier symbol expands to open the Might Reels with 100 fixed pay lines. During the free spins, there is a different reel set that has more high-valued symbols, giving even bigger wins.

The Big Bet option is a common feature in most of Barcrest’s slots. It is ideal for risk takers, as it requires players to stake higher for a five spins consecutively. When this feature is on, the game’s RTP shoots to 98%, with wins being summed up until the final spin. One such option is the 20-coin play, usually played on 50 pay lines.

In this case, the wild symbol expands both in full and partial view, opening up the Mighty Reels to ten rows. The 30-coin play features extras from the 20-coin option with all low-valued symbols having been removed. The more the coins, the more the extras, with potential wins happening with the high-valued symbols.

Soldier of Rome slot has a medium volatility with a varying RTP of 94% to 98%, based on a player’s strategy of choice. The bet size starts at 0.01 coins to 500 coins. If you stake anything less than two credits, the game’s RTP is the standard 94%. The higher the stake, the higher the RTP. The Big Bet play mode activated the highest RTP of 98%

What is the advantage of Soldier of Rome’s money burst reels?

The fact that the reels spin independently means that they trigger the lighting spins, giving players even more stack symbols that can potentially give huge rewards.

What does the Big Bet feature do?

When you play on Big Bet mode, the game’s RTP increases to your favor, providing you with bigger and more frequent wins.

Where Can I play Soldier of Rome for real money?

Barcrest’s Soldier of Rome is available in an array of online platforms. However, you will need to confirm the legitimacy of your platform of choice. Ensure that they are reputable and licensed.

Knowing the highly combative nature of the Roman legions, one cannot help but think of themselves as victors when playing this game. Barcrest has outdone itself yet again on this slot. The animations are brilliant, the graphics crisp, and the entire game plays interesting. The unique features here give the game a cutting edge, appealing to most gamblers. While the win potential is not overly high, the game’s low to medium volatility increases the frequency of the wins.