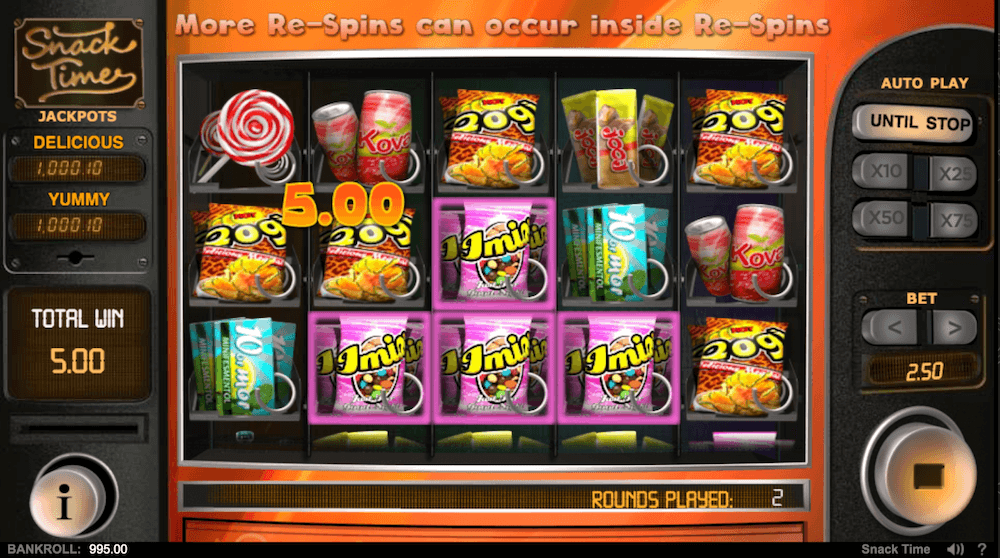 The thrilling online Snack Time slot is a modern video game by the 888 Gaming Brand that you can play from $0.25 to $250 per spin. It provides 5 spinning reels, 3 rows, and 5 possible winning ways as well as two progressive jackpot prizes.

You can find dozens of snacks that allow you to win big cash rewards inside this slot. One thing that you should note is that the wins are paid on Tetris-like patterns and not the usual left to right or right to left format used in most online casino slots.

These combos appear anywhere on the five reels and in any direction, meaning that you can form a win by creating an ‘L’ formation. Specifically, there are four and five window combination patterns that award you with great prizes.

The vending machine layout of Snack Time suits the slot well with various buttons on both sides of the reels controlling the action. Its symbols are a collection of odd snacks and drinks, including Kova, A, Jooj, and Qoogi – may they exist somewhere.

The slot doesn’t have a wild or bonus symbol, but there is a Red Question Mark Sign that helps to trigger the bonus round.

The only bonus feature in this slot is a little red question mark symbol that plays a part in the Pick Me Game. There is also the Combo Bonuses that can reward you with exciting prizes.

The little red question mark lands on the first and fifth reels during the base gameplay to reward you with the Pick Me Game bonus. Land two of them on the two reels and you are asked to pick one to reveal a prize multiplier that can increase your cash winnings.

The slot’s winning patterns let you land one or more winning combos at once, and you can get free spins for landing them as follows:

The Snack Time slot has two Delicious and Yummy jackpots that you can see on the left of the reels. They award random prizes since they are progressive jackpots.

The base game can award you up to 500x your bet when you land a winning combo.

The Return to Player of Snack Time Slot is 95% and is a high variance online video game. You can have a lot of fun when playing this game.