Planet of the Apes Slot

Get $20 FREE and Play Planet of the Apes Slot for Real Money!

Where can I Play Planet of the Apes?

You can try the game for free right here, but as it is a really good game you might want to try the real money version. In that case you should head over to BetMGM that is a experienced operator from the european market that has a great platform for this and many other slots.

The game is loaded to the brim with cash-rich features such as stacked wilds, cash bonuses for ape/human symbols, and transforming symbols. Planet of the Apes slot also has Rise Free Spins feature that rewards you with 10 free spins, and the Dawn Free Spins features that can reward you with up to 15 free spins. During the Dawn Frere Spins round, you can pocket as much as 3000 times your wager. The game allows you to bet as low as $0.20 to $200 per spin. Besides, you can use the Auto Play feature to spin the reels for up to 1,000 times without touching a button.

Let’s take a closer look at the Planet of the Apes Slot in this review. 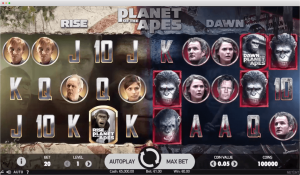 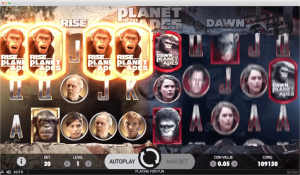 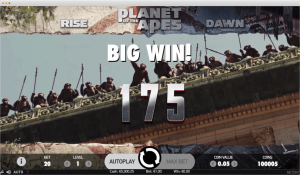 Planet of the Apes Slot Features

There is a wild red symbol on the right, a gold one on the left, and both replace all other symbols to form a winning combination except the scatter/bonus icons. The Lab Logos represent these wilds and come in the form of sigil of stars in circles.

There are also scatter symbols on each side, both appearing as different images of Caesar, who is the main ape. The two scatters pay independently, and you require at least three of the same to receive two free spins.

Planet of the Apes video slot has several bonus features that you can take advantage of and take-home better prizes. They are:

There is a possibility of the Dual Feature bonus occurring before you make a spin in base game mode. You can quickly know when it activates since one symbol is collected randomly from every reel set, and then the reels respin. Any other Dual Feature that occurs after the respin freezes on that reels to give you a chance of forming a winning combination in the next round.

Alternatively, they can move to the opposite side, where you should follow them and pray that they create a winning combination. The respins stop if there are no new Dual symbols, and your payment is made.

You can activate the Dawn bonus by landing the Dawn bonus icon on the fifth reel on the right side of the slot. All apes and humans turn into a single matching symbol that can help you create a winning combination.

The Rise bonus pops up on the first reel on the left side of the slot if you receive the Rise bonus icon. You get a cash prize for every ape and human symbol that shows up during this round. 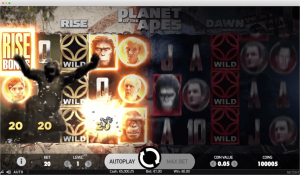 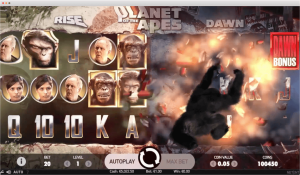 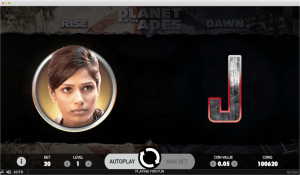 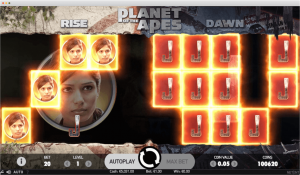 If stacked wilds cover one reel on the Rise side of Planet of the Apes slot, they are copied over to the opposite reel on the Dawn side. You get a chance to get more matching symbols that can reward you handsomely.

Planet of the Apes slot offers two free spins modes that you can activate if you land three scatters on the Dawn or Rise reel. They work as follows: 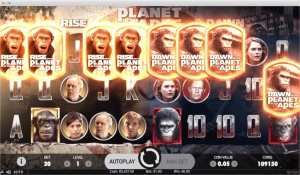 Planet of the Apes slot has a non-progressive jackpot of 1,000 coins, and you can win a maximum of 600,000 coins if you place the maximum bet.

Planet of the Apes Slot RTP