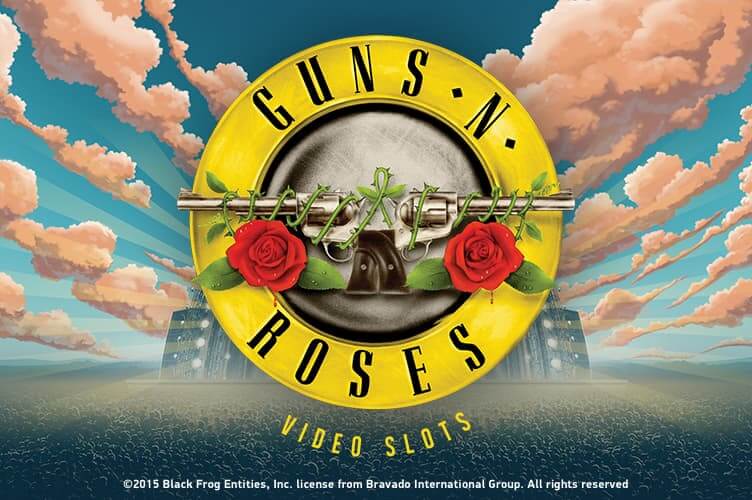 Guns N’ Roses slot is a branded video game by Net Entertainment that hit online casinos in 2016. It is based on the popular American rock ‘n’ roll band that sold over 100 million records around the world in the 80s.

The slot has all the band members, including Slash and Axl Rose and is available on tablet, mobile, and desktop devices. Guns N’ Roses features 5 reels, 3 rows, and 20 paylines and you can place a bet of between $.020 to $100.

Its jackpot is set at 750x your bet, but that is no all this slot has on offer, just like other titles, like Gong Xi Fa Cai, it is a high paying slot with a great storyline. Join us in this review and learn everything you need to know to play Guns N’ Roses slot, have fun, and win money.

Right from the word go and through your gameplay, you see dozens of guns and roses representing the low-value symbols. These come in the form of letters J, Q, K, and A, and number 10.

The high-value icons are Duff McKagan, Slash, and Axl Rose, which also happen to be the most critical members of the 80s band. You also get guitar picks from the 1988 album ‘GN’R Lies’ as well as the 1991 album ‘Use Your Illusion II.’

Guns N’ Roses symbol represents the wild of the game and can land on all the reels bar the third reel. It can replace all other features in the game except for the Vinyl record, which represents the bonus symbol.

Guns N’ Roses also has other types of wilds, including:

Guns N’ Roses slot is full of bonus rounds to ensure that you enjoy your time when spinning it. Here is a review of its significant bonuses.

The feature activates randomly and can provide you with three re-spins with up to two Stacked Wild reels. Here is how it plays out:

Appetite for Destruction Feature is named after Guns N’ Roses band’s first album and is triggered by cross symbols randomly. It pops up fully or partially on the reels and no other feature can appear when it is activated.

Similarly, it cannot be activated when the Legend Spins feature is enabled, or when three or more bonus icons appear.

It is a random feature that can activate any time during the base game. The function multiplies paylines at random with between a 4x to 10x multiplier.

Solo Multiplier cannot appear during the Legend Spins feature or the Appetite for Destruction feature.

You can trigger this round if you land three bonus icons on the first, third, and fifth reels. It is a pick-and-click bonus that provides up to three levels.

Every pick can reward you with a maximum of 600 coins. Here is how the three levels work:

A coin win is a straightforward feature that appears on the Bonus Wheel to reward you with between 200 to 600 coins.

Another bonus round activated by the Bonus symbol is the Encore Free Spins, and you get up to 10 spins. You need to land three symbols bearing any of the band members on the second, third, and fourth reels.

Rewards are paid just like the base gameplay and you can activate more free spins by landing three bonus symbols.

There are a lot of wild symbols rocking Guns N’ Roses slot, and they can show up anytime on the reels, except reel three. They can replace any other icons bar the Bonus Symbol to create a winning combo.

Each Wild can transform into an Expanding Wild to cover a reel vertically and boost your wins. An Expanding Wild can also replace all icons except for the Appetite for Destruction Wild, the Stacked Wild in Encore Free Spins, and Wild in Legend Spins.

Guns N’ Roses slot does not carry a progressive jackpot, but you can win up to 75,000 coins from the bonus round.

Guns N’ Roses slot has an RTP of 97.0%, which is entirely appearing compared to most online video slots.