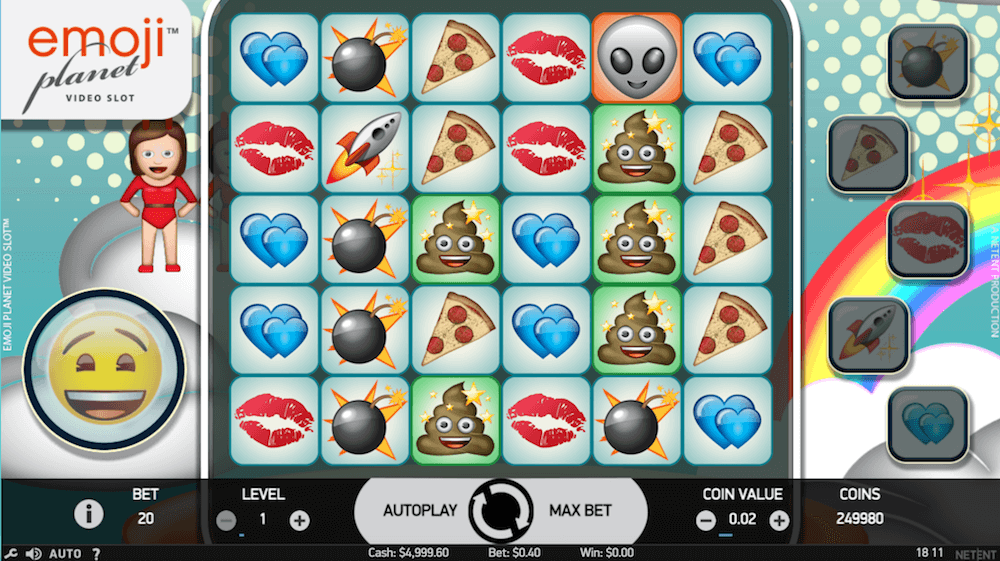 Emoji Planet slot is an exciting video game powered by NetEnt that went online in 2017 and provides 5 reels, 6 rows, and 20 paylines. The slot is accessible via mobile, tablet, and desktop devices and is playable from $0.20 to $200 per spin. It’s a great slot, just like Gong Xi Fa Cai.

It is a game that provides up to five different bonuses and has a fixed jackpot of $10,000 that you can win when playing the base game. Emoji Planet uses the Avalanches effect where symbols fall into position rather than the standard spinning effect and is a highly entertaining and fun to play. Learn more about the Emoji Planet slot in this review.

Emoji Planet is a NetEnt slot, and that means you can expect it to have some fantastic features. It offers five Emoji Features that function as meters and they are the Kiss Mark meter, the Bomb meter, the Rocket meter, the Pizza meter, and the two Hearts meter.

Emoji Planet doesn’t have a scatter symbol, but there is a wild that appears as the slot’s logo and replaces all other features to create a winning combo. The wild icon pays the highest amount if you form a winning combination with this feature.

Emoji Planet slot comes with five bonus features that add excitement and winning potential. On the right side of your screen are the five Emoji meters showing the least paying symbols.

A winning combo of one of these icons on a cascade illuminates a part of the meter with the number of icons in the cluster. You need up to 12 symbols to fully illuminate the meter and trigger one of the bonuses on offer:

Here is what each bonus has on offer:

If at least two Emoji Meters get filled at once, the Emoji bonuses activate in this order: Bomb, Pizza, Kiss Mark, Rocket, and Two Hearts. Any win you get here is added to the wins you made when activating the feature.

Emoji Planet slot has a base game jackpot of 10,000 coins, but you can always win more by playing the bonus round.

Emoji Planet slot has a theoretical RTP of 96.4%. It is a medium variance slot that you can have fun when spinning it.