Video poker is a type of casino game derived from the classic five-card draw poker game. However, unlike the game of five-card draw poker, video poker is played on a computerized console that is similar in size to that of a slot machine. Thanks to the inception of internet-based gambling, players can now enjoy software-based versions of the game in the click of a mouse button – or using touch and swipe gestures via mobile devices.

Where to Play Video Poker

Why Should You Play Online Video Poker

A lot of bettors are intimidated by the regular card games at casinos because of the level of skill required to play the game. For video poker, the game is easier to understand even for rookies who do not have much gambling experience.

Comes with a mix of challenge and entertainment

While the game is less demanding than the likes of poker and blackjack, it’s not as easy as the mindless spinning of slot machine reels. Video poker has thus been an excellent cross for players looking for a bit of a challenge without being too tight to maintain the spirit of casino fun.

Video poker, when compared to all the other casino games, has the lowest overall house edge. It, therefore, means that you’ll have a better chance of winning some real money when you start playing.

Unlike other casino games, you have a lot of say in how you play the game, which eventually affects your winning chances as well. For instance, you can pick the number of hands (up to 100 depending on the game) you want to play. Moreover, you can as well choose which and how many cards they can save before you draw their final hand.

Unlike many card games, there are several variants of this game that come with progressive jackpots for lucky players. Such jackpots are typically unlocked randomly, but, it’s best to place maximum wagers per round to improve your chances of un-locking the reward. And this progressive jackpot is typically available on top of the standard jackpot payout earned from hitting the royal flush in the game.

What makes playing video poker interesting for most gamers is the range of variants that are available mainly thanks to online casino gaming. While most spinoffs of the game are based on the 5-card draw type of poker, some adopt different modification styles to make the game even more enjoyable. As we speak, there are over 100 various offshoots of the game, and the number keeps growing as the demand for the game increases.

Most Popular Types of Video Poker

Despite being at an all-time high in popularity during the 1980s, video poker is still one of the most liked casino games worldwide. However, when casino sites became available online, their popularity began to rise once again. This is because online video poker made it more convenient for players to enjoy the game regardless of their physical location.

With its evolution, there are a plethora of video poker variants that you can enjoy today, primarily via internet casinos. Here are some of the most popular types:

How To Play Video Poker

Video poker is almost similar to traditional poker. Thus, many players are already aware of the basic rules, especially if you know a thing or two about poker. With simplicity at its core, you won’t have to scratch your head too hard for you to earn some money when playing.

In a nutshell; when you start playing the game, you’ll receive five cards, and you’ll then make a bet. You will then be given an option of holding any of the cards that you have at hand. After holding, you’ll have to get more cards in a bid to complete your hand. You will receive additional cards, and the game will progress depending on whether you complete your hand or not. In case you form a paying hand, you will receive a payout after which you can initiate another round by placing a new wager. It is up to you decide if you want to place a new bet or not.

Step by Step Guide & Rules of the Game

Before anything else, one crucial factor to remember is that you are most likely to find more than 100 variations of video poker at big casinos. Therefore, these games may vary by game type as well as money denomination. Additionally, different games have different kinds of paytables.

In a standard 52-card poker game, the dealer has the potential to deal you approximately 2,598,960 different hands. However, if we take duplicates into account, then this number can become easier to manage. If a hand consists of 6h 6s 6d 4h 4s (s = spades, d = diamonds, and h = hearts) it differs from the hand that has 6h 6s 6d 4h 4d. However, both of these hands can be played one and the same way.

If you genuinely want to become pro at video poker, you need to be aware of how to play each of the 2.5 million-plus hands properly. While this may appear insanely hard to achieve, once you start learning you will come to realize that it’s not. Remember, video poker, unlike blackjack and live poker is fundamentally different in that it offers only one betting interval. Here is a step by step guide of how to play video poker.

The amount of money you want to bet on each hand is the first key decision you make when playing video poker. The two elements involved in this include the number of coins and the coin size. Keep in mind that every hand will cost you a bet amount, which will be calculated as follows:

Since different games have different coin sizes which range from 1c to $10, it is essential that you choose the right table. Another factor that comes in to play when calculating the bet amount is hands played. Therefore, the calculation will be as follows

Here is a quick example:

If you wager 8 coins per hand at 50c per coin and playing 6 hands each bet would cost $24:

After placing your wager, it means they are now ready to play. You will see a ‘Deal’ button on the screen which after pressing you will receive five cards facing up. At this point, you are supposed to start making choices. It is also where your knowledge of playing poker hands needs to be implemented together with knowing which playtable to choose, which cards to keep and which to discard; that is if you want a better chance of getting a winning hand.

There are various gestures you can use when it comes to selecting the cards you want to hold, depending on the game. In most games, you can do this by clicking on the card itself while other games have a ‘Hold/Cancel button on the display below each card. Hit the button underneath the card or touch the card again for canceling the hold.

If you are happy with the cards you have chosen to hold, click on the Deal button again. It is important to note that other games change the Deal button to Draw, but it serves the same purpose. After doing this, any card that you hadn’t held will be returned to the pack.

Your payout depends on the type of video poker variation you are playing, coins, number of coins, and hands you played. Thus, if you have a winning hand, the bigger the size of your bet, and the higher the number of hands you are playing at a go, the more money you’ll win.

As you’ve seen on the steps above, video poker is a simple game that comprises of simple rules. Moreover, depending on the game, you could have a chance to hit the jackpot or perhaps even have a chance Double Up after winning your hand.

To sum everything up, here are the most common terms you should master to understand the game better and play like a pro;

The history of video poker

Having made its way into the casino in the 70s, video poker has become one of the most popular forms of gambling. Even though modern video poker differs from the traditional one, the principles are still the same. Since there was a new wave of video terminals, classic video poker was designed to take advantage of the technology, thus creating a game that is familiar to most gamblers.

By the 1980s, the demand for video poker machines was quickly skyrocketing because players and visitors alike had started to come in throngs to casinos offering this type of game. It is easy to see why video poker became so popular quickly, not only were they easy to dive in but also colorful and flashy.

Since traditional table games required at least some basic level of expertise and social interaction, video poker machines provided a great alternative. A player had a modest square of personal space where he or she could have privacy and take things at their own pace without any external pressure. The bottom line is that video poker was an approachable alternative and its appeal continues to this date.

At present, video poker remains a fundamental component of both land and online casinos all over the world. Thanks to its popularity, it was not long since video poker was introduced to the online verse. With the introduction of online casinos, video poker has managed to grow massively in popularity since it is ideal for that setting. This game needs no dealers, physical cards, balls, or dice. Similarly, online video poker allows gamblers to play in the comfort of their home, anywhere, and anytime.

The evolution of video poker machines

Even though video poker is wildly popular today, its popularity had not peaked to this extent years back. Since video poker was first introduced, there have been significant changes to the game. Let’s take a look at some of them;

To fully understand the development of the video poker machine, it would be a great injustice not to start with predecessors of the game.

Poker Matic was the world’s first official video poker machine and was introduced by Dale Electronics in 1970. This machine was installed in almost every casino that existed in Las Vegas during that time. Despite its unpopularity, this poker machine laid the foundation for the future of poker machine games without knowing that they would grow to capture the imagination of the gambling public.

By mid-1970s, Si Redd a distributor for Bally’s Gaming promoted a new game he called Video Poker to the executives of his company. Since the company didn’t want to branch out from their core business of slot machines, they rejected the idea. However, they allowed Si to leave with his patent and within months, partnered with another company and together, they launched SIRCOME (Si Redd’s Coin Machines). Despite the new game peaking at a slow pace, by 1981 it was one of the most sought-after additions to casinos. 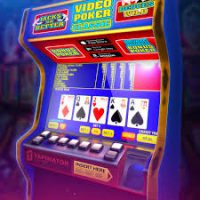