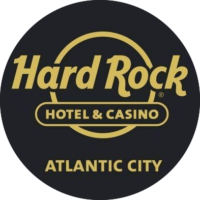 The Hard Rock Atlantic City is one of the most popular casinos in New Jersey’s gambling Mecca. The complex is located on a 17-acre plot of land on the famed Atlantic City Boardwalk close to the Steel Pier. Hard Rock Hotel and Casino Atlantic City is mostly known for its many gambling options which populate a massive 167,000 square foot casino floor. However, there are many other world-class features including 1,971 hotel rooms, multiple entertainment venues, and a variety of fine and casual dining establishments.

The new Hard Rock Meadowlands is another casino resort under the Hard Rock brand which will be one of the largest casinos in New Jersey.

The Hard Rock Hotel and Casino Atlantic City was originally the Trump Taj Mahal when it was built for an estimated $1 billion in 1990. Even then, the Hard Rock brand was known for its chain of Rock and Roll themed restaurants. The Hard Rock Café was a popular feature of the original Trump Taj Mahal. Trump Taj Mahal encountered financial and legal problems almost closing in 2014. However, a new ownership group stepped in a purchased the property. Still, new ownership could not save the day as the Taj Mahal closed its doors on October 10, 2016.

A new era commenced for the embattled facility in March 2017 when Florida’s Seminole Tribe bought it and renamed it under their Hard Rock International brand. The Hard Rock Hotel and Casino Atlantic City officially opened its doors to the public on June 27, 2018. The casino was granted a sports betting license a few months later. Hard Rock Hotel and Casino Atlantic City now operates an onsite sportsbook as well as an online casino and sportsbook.

The Hard Rock Atlantic City offers loads of awesome things to do. You could go swimming, take in a spa treatment, go for a casual meal or upscale dining experience, and enjoy some of the best live entertainment in the world. But all of those things merely compliment the real reason why so many people visit Hard Rock Atlantic City: The casino gambling. With over 2,000 slots, over 100 gaming tables, and a state-of-the-art sportsbook, Hard Rock AC serves up a ton of gambling possibilities.

Unibet is the most popular online casino operating under the Hard Rock AC brick-and-mortar casino license. Unibet online casino offers a complete casino experience with a full range of slots, table games, live casino with live dealers. This makes it one of the best online casinos in NJ. The Unibet online sportsbook will also be available through your Unibet casino account.

It should come as no surprise that Hard Rock AC’s slot machines attract plenty of players. Guests have over 2,000 slots, video poker, and electronic gaming options available on the sprawling casino floor. Slot enthusiasts have a variety of themes and stakes to choose from. While some prefer the simplicity of traditional three-reel slot games, others prefer modern video slots with multiple reels and many ways to win. These modern slot games go beyond basic themes like Ancient Egypt, the Wild West, and Music and Entertainment. Many of these newer video slots enable players to immerse themselves in intriguing storylines and narratives. They have attention-grabbing high definition graphics and stellar sounds. A lot of the new generation of slot games also have a range of features including autoplay, Wilds, Scatters, Bonus Rounds, and mini-games.

In addition to Hard rock Atlantic City’s impressive collection of stand-alone slots, they also have an abundance of progressive jackpot slots. These progressive machines are favorites of players who want to win a life-altering chunk of change. These jackpots can reach as high as six and seven figures. How does that happen?

Well, progressive slots are linked. They may be linked to a few other slot games in that casino, or they could be linked to thousands of machines throughout the United States or even the world. Every time to place a bet at a progressive slot, a portion of the wager amount goes into one ever-growing jackpot. When you consider how thousands of players can be playing on a wide area network of slots, it’s easy to see how quickly these jackpots can grow and how huge they can get.

Video poker fans will be treated to a nice selection of video poker games. Deuces Wild, Joker Poker, Tens or Better, and Bonus Poker remain among the favorites of video poker fans everywhere. You’ll even find progressive video poker games at Hard Rock Atlantic City. There are also a number of electronic gaming machines on which you can play your favorite live dealer table games like Blackjack, Roulette, and casino poker using a touchscreen.

Hard Rock Hotel and Casino Atlantic City offers a full arsenal of table games. However, it’s not as simple as saying you want to play Blackjack, Baccarat, or a casino poker game. You see, there are several variants of those games. For instance, while you can play Classic Blackjack, you could also play:

Spanish 21: This game is played with six or eight decks with of the Tens, Jacks, Queens, and Kings removed. This increases the house edge, but insurance, late surrender, and surrendering after doubling down even out the odds a bit.

Pontoon: Like Spanish 21, Pontoon is played with multiple decks without any of the Tens, Jacks, Queens, or Kings. Instead of traditional terms like Hit, Stand, and Blackjack, you have lingo such as Pontoon, Twist, and Stick.

Blackjack offers players several different types of betting options such as Insurance, Splitting, and Doubling Down. There are optional wagers too. Bet on Lucky Ladies and win if your first two cards add up to 20. With a Blazing 7s Progressive wager, you can win big if you nail a 21 with three suited sevens. You can place a 21 + 3 or a Match the Dealer optional wager too.

Baccarat is a traditional favorite at casinos all over the world and Hard Rock Atlantic City has a few exciting variants of it including:

Super Pan 9: This version of Baccarat is played with all of the sevens, eights, nines, and tens removed. The player and the banker both get three cards with the option to draw a fourth.

Three Card Baccarat: This version of the game is popular in Asia. It uses a single deck with the dealer and player getting three cards each. But there’s a twist. A hand consisting of three face cards is the highest hand. This is followed by traditional hand rankings.

Casino poker games are wildly popular. As opposed to traditional poker in which you play against other players for a common pot, most casino poker games put you up against a dealer and the payouts are determined by a pay scale. The object of games like Mississippi Stud, High Card Flush, Let It Ride, Heads Up Hold ‘Em, and Ultimate Texas Hold ‘Em is to make the best five-card poker hand. Other casino poker games like Three Card Poker have you make the best three-card poker hand. Because you only use three cards, the hand strengths are a bit different than traditional hand strength rankings.

The Craps and Roulette pits at Hard Rock Hotel and Casino Atlantic City are always rocking and rolling. Give the Big six Wheel a shot if you’re looking for a really easy game that requires no skill. Are you new to casino gambling or just looking to learn another game? If so, Hard Rock Hotel and Casino Atlantic City offers free gaming classes so you can learn how to play and hit the tables with confidence. You can also ask one of the friendly table hosts how to play. They will be happy to teach you the rules and some basic strategies.

One of the more recent additions to the Hard Rock Casino AC is the Asian Gaming Room. You’ll find Pai Gow, more Baccarat, Asian Poker, and an assortment of Chinese casino games. Other games include:

The Wild Card Rewards program lets members earn points that they can use to exchange for various items and perks. The more you play slots and table games, the more Wild Card points you earn. It’s free to join and you start reaping the benefits right away. Those on the bottom tier can take advantage of exclusive multiplier offers, free play, complimentary gifts, and discounts at the hotel, restaurants, and retail outlets. The rewards get better and better as you ascend through the tiers.

Hard Rock Hotel and Casino Atlantic City is one of New Jersey’s most popular destinations for a reason. This facility has everything you’d ever want in a modern casino resort. Dining, shopping, luxury amenities, world-class entertainment, and a booming nightlife will make your visit a memorable one. Of course, the gargantuan casino floor with its huge array of gambling options is the Hard Rock AC’s crown jewel. Make sure you drop by if you’re planning to visit Atlantic City.

Does Hard Rock Hotel and Casino Atlantic City have any special offers for veterans?

How old do you have to be to enter the casino?

You must be at least 21 years old to enter any of the gambling areas.

Yes. Floor staff will provide you with free alcoholic and non-alcoholic beverages as long as you are actively gambling.

Can I smoke at Hard Rock Hotel and Casino Atlantic City?

There are several designated smoking areas throughout the resort.