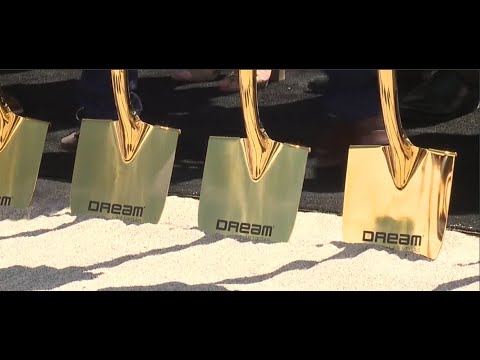 Dream Las Vegas, a 531-room casino resort on the south side of the Strip, had its ceremonial groundbreaking on Friday by starting its casino construction. The project is predicted to cost $550 million and is scheduled to open in late 2024.

Dream Las Vegas has begun construction on Las Vegas Boulevard, near the private aircraft terminal of McCarran International Airport, two blocks from Allegiant Stadium and not far from T-Mobile Arena.

Developed by Shopoff Realty Investments and Contour in Southern California, Dream Las Vegas is expected to provide a more intimate, boutique-style experience in an area dominated by big hotel-casinos with hundreds of rooms apiece.

"Dream Las Vegas will include seven dining and nightlife venues: a rooftop deck, bar and lounge; three feature restaurants; two additional bar and lounge concepts on the gaming floor; and a grab-and-go café on the street level," Dream management said, "Additionally, it will offer 12,000 square feet of private meeting and event space, a spa, a fitness center, and on-site parking."

The project near the airport in Las Vegas has previously faced a series of design changes to face possible illegal drone flights, laser lights, and even bombs placed in garbage trucks.

In an interview with the Review-Journal, Jay Stein, the chief executive officer of the operator Dream Hotel Group, stated that his company provides a "highly styled product" that includes a diverse range of food and beverage options.

According to Stein, many people appreciate the entertainment Las Vegas has to offer, "but the hotel experience was never right for them," and he noted that Dream would be an upscale destination for its guests.

Shopoff Realty founder Bill Shopoff emphasized that the resort's smaller size would set it apart from other resorts in Las Vegas.

"We definitely look to be different, and part of that was, let's be boutique-size," he said.

Shopoff further said that the group valued the project's closeness to Allegiant Stadium and the private aviation facility at Harry Reid International Airport.

The ground-up project also indicates a surge of commercial activity for a stretch of Las Vegas Boulevard that includes megaresorts such as Mandalay Bay and Luxor on the west side of the street and a mix of low-slung motels, retail space, vacant lots, boarded-up structures, and other sites on the east side.

"We have some work to do to finish off this end of the Strip, and … you're the leaders," he said.

The Dream developers made public announcements about the project in February 2020, one month before the COVID-19 outbreak disrupted daily life and left the Strip into a once-unthinkable ghost town of closed resorts.

According to Shopoff on Friday, Las Vegas would recover from COVID-19. He is confident that the rest of the world would “figure out” a solution.

"I won't tell you I never had a sleepless night during the process because I definitely did, but I think we ultimately decided: stay the course, and we'd be fine," he said.